Will Chase’s story is an earthy tale of a maverick farmer who works hard, sells well, and then starts all over again to create a second international brand setting new benchmarks for quality and pedigree.

Tyrrell’s crisps (named after Will’s family farm) was created in 2002 and expanded rapidly all across Europe and America. A seed to crisp phenomenon of a sexy retro-packaged 100% natural crisp. And we all love a good crisp.

A humble potato supplier for over 20 years, Will needed to diversify. Despite producing a healthy turnover the profit wasn’t worth all the effort and in 2002 he decided to branch out and launched a crisp factory from his Herefordshire farm.

As the brand grew, Will began traveling in pursuit of better equipment and flavourings. During a stopover in America – where else do you go to learn more about deep fat frying – he discovered a small batch artisan distillers. Back at home the problem of a huge surplus of potatoes too small to make crisps from made his next decision a no-brainer: the first start up distillery in the UK in more than 250 years. History lesson over – where is Chase today?

Did making crisps drive you to drink?

No, we just decided to make people happy instead of fat… In fact the brand is doing so well that we’re now selling our vodka to Russians – coal to Newcastle you might say. While we distill a range of products, everything in our business leads back to vodka and since selling the Tyrrell business we are 100% focused on spirits. Where is the vodka made?

Our farm is based in Herefordshire, a region that boasts some of the richest farmland in the world. It’s here that we grow King Edward and Lady Claire potatoes for the distillery, as well as cider apples for our Naked Chase Apple Vodka and Williams Gin.

Having the distillery located on the farm allows us to keep a watchful eye over how our potatoes and apples move from field to bottle. It’s this single-estate approach that makes us different – something you can taste in our award-winning vodka. How does the fermentation process work?

We start by mashing up our potatoes and apples, which are all harvested from the fields and orchards surrounding the farm. Apples are sweet enough to ferment naturally, but we add a brewer’s yeast to the potato mash to help it along the way. After about a week, we’re left with a low alcohol wine. So you distil on site as well?

We put the low alcohol wine from the fermentation stage into our bespoke copper batch pot and wait patiently as it’s distilled four times here and twice more in our rectification column. The column is the tallest of its kind in the world, at 70ft it rises through the roof of the barn. At this point, the spirit reaches the dizzying heights of 96%abv and is well on its way to becoming Chase Vodka.

After distillation, the raw spirit is tempered with water drawn from a source at the heart of the farm. Once it’s reached a much more drinkable 40% abv, we hand bottle our vodka and seal it with a handmade cork. The whole process, from farm to bottle, takes up to two weeks. We’re a stone’s throw away from the Malvern Hills – home of the Queen’s favourite water. 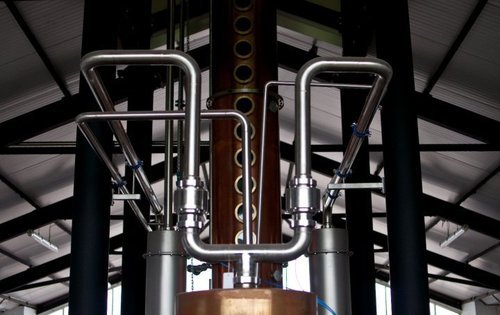 You make gin as well as vodka now.

Unlike most distilleries, we opt out of buying in a readymade neutral grain spirit. In our quest for traceability in the industry, we use either our Chase Original or Naked Chase Vodka as the base to our Williams Gins.

Opening the belly of our 250l Carter head style still, Ginny, we add in the raw spirit at 96% along with the same amount of water from the farm. The botanicals are stuffed into a pillow case and placed into the carter head, where the flavours are infused into the vapours passing through. This method provides a very floral style with great length and depth. 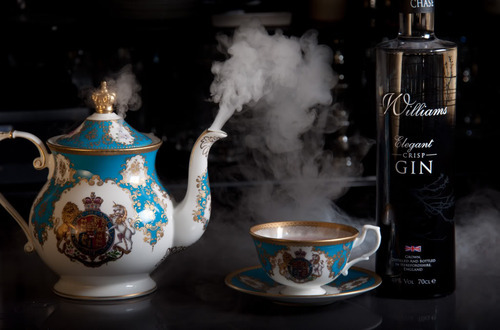 What makes Chase so special?

Very small volumes are produced: 16 tonnes of potatoes makes only 1,000 litres of alcohol, which after 40 hours can be disheartening, but it is testament to the quality of our vodka – a supreme quality over all of the other mass produced vodka. Most gins on the market buy in what’s called a neutral grain spirit and simply re-distil, this can be sourced in the market for around 50 pence a litre, our base spirit costs around £4.00 a litre to produce, so the cider is a great way of showing off the pedigree of our gin. When did you have your earliest tipple and what was it?

Good honest Herefordshire cider as a young boy. Growing up on the farm most summers we’d help with the harvest. To celebrate, the harvest farm-hands would gather to tell tales of the previous weeks hard work washed down with lashings of cider. 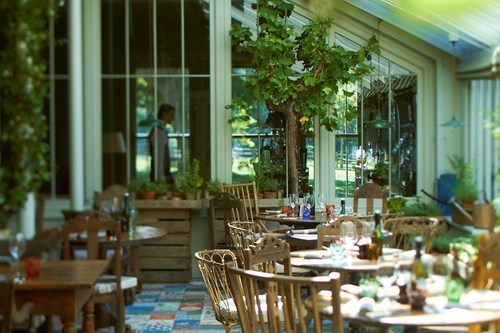 The dining room at The Pig in Brockenhurst, the group have some top offers in January, tap here for more!

What inspires the different flavours?

We try to preserve quintessential British flavours; things like Seville orange marmalade or rhubarb vodka, which we hope will evoke lost memories and tastes. They are all distilled in season but can be enjoyed all year round. I hear your rosé is rather good – how has the transition from potato to vine evolved?

My father, Will, can’t stand lying on a beach, and is always looking for the next adventure. A few summers ago while in Ibiza, he headed to the bar for a glass of wine. While talking to the sommelier he realised his farming credentials put him in good stead to take on a vineyard – a holiday dream which became a reality the following year in Provence. The rosé debuted this year and sold out by the end of August.

Yours is a real family business – how does it work and what’s the secret apart from drinking copiously?

I have huge admiration for family run vineyards and distilleries. There are so many aspects of the business that help engage different members of the family. We each focus on our own area of the business contributing to the main goal we are all pushing towards. Communication is key and we constantly talk to gage myriad ideas and motives. 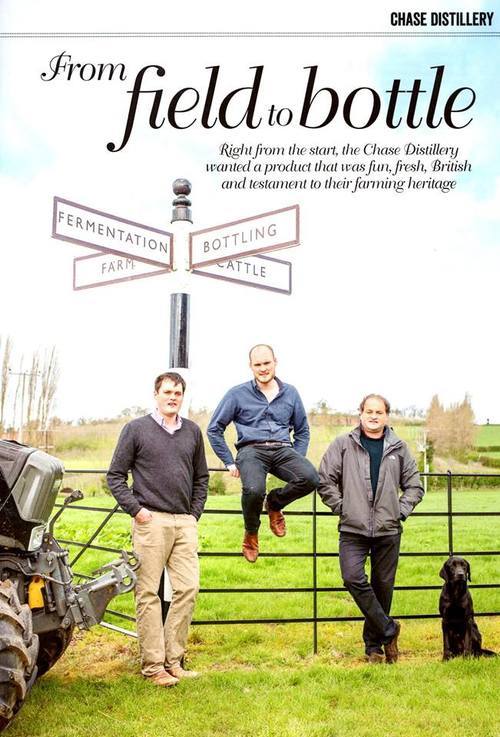 There has been a resurgence of craft distilling in the UK recently, how does Chase compare to the rest?

Since we began distilling in 2008, Chase has come a long way and the restaurant and bar scene has changed and progressed dramatically. Greater choice of spirits has certainly increased but the transparency involved in our production process sets us apart from all other spirits. Like a fine wine, you would never dream of buying without knowledge of its origins, the grapes, the terroir and even the winemaker. We can trace each bottle to the very field we harvested, refusing to buy in neutral grain spirit, our process is incredibly laborious but, in our opinion well worth the effort. The Pig on the beach, winner of the Sunday Times Hotel of the Year!

What better way to relax after the festive season than a stay at THE PIG? THE PIG we would like to offer you the perfect post-festive break.

Sarah Siese and family have tested over 70 hotels in 40 countries around the world. Sarah is a hotelier-turned-writer whose main interest is bespoke luxury travel. She has travelled the world, from Antarctica to Zululand, never tiring of reporting on anything from celebrated haunts to the worlds best-kept secrets. Her latest travel book, Heaven on Earth KIDS, even gave her three lucky children the opportunity to tag along. Managing Director, St Christopher’s Publishing Ltd 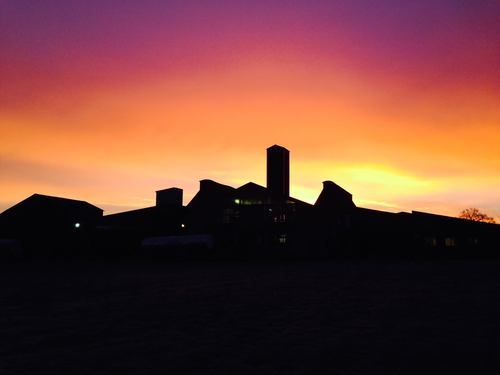